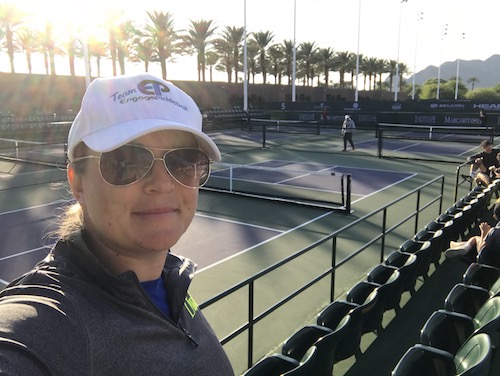 Nicole is IPTPA certified as well as a 5.0 level pickleball player. Coaching is her passion and she loves helping players of all levels raise their game.  No matter if you are new to the game, an avid recreational player or an experienced tournament player, Nicole can help you elevate your game to the level of your dreams. 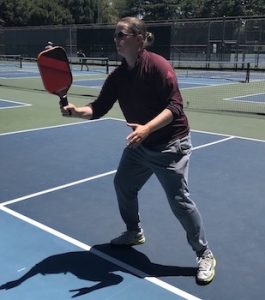 Nicole first learned of pickleball in late 2015.  She noticed a group of people gathering to play this “weird game” with what looked to be enlarged ping pong paddles and a whiffle ball. They would play regularly on the same tennis courts at a time of day just before her tennis academy was about to start which is why she happened upon seeing them.

She had no idea what she was looking at until she later struck up a conversation with the group organizer who explained to her what this sport called “pickleball” was all about.

With a busy tennis teaching schedule it wasn’t until the following summer that she first picked up a paddle when coaching tennis at a retreat in Mexico.  Some people on the retreat also brought all their pickleball gear and were eager to play as well as introduce others to the game.

Shortly after that, pickleball was being launched at the club where Nicole worked and she assisted in putting on the grand opening event.

It was there were she met Jordan Briones, a local player that was widely considered one of the best players in the country.  Jordan invited her to play with his regular group the very next week.

She went and that was it…she was hooked and started going every week.  The people were great and the game was addicting and so much fun!

Thanks to her tennis playing background, she progressed in levels quickly and was soon training to compete in tournaments.  She also attained IPTPA certification and began coaching.

Together they bring you high quality online instructional videos designed to help you take your game to the next level and beyond via their popular YouTube channel.

The Primetime Pickleball Youtube channel has gained more than 25,000 subscribers as well as 4,000,000 video views and continues to grow rapidly.